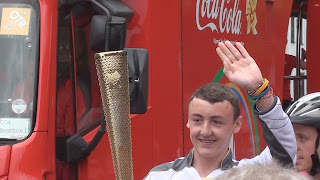 Since the end of May we have been filming material for a short film on young Cameron Foster, Olympic Torchbearer, supporter in the community and fund raiser.
This has taken us to several different venues to watch him in action, at the Street Games annual dinner, coaching disabled children at sports, the lighting of the Wigan Beacon, the carrying of the torch through Hindley and so on.
We are indebted for the support we have received in the making this film, from such interviewees as Martin Ainscough, Trevor Barton MBE, Brian Blessed, Sue Heritage and others, all of whom have given their time to say strong, positive and supportive things about Cameron. And a special mention of Cameron's parents who took the brunt of the consequences of Cameron's skiing accident when he was 9, which triggered what he does today.
We are not quite finished yet, and there is still some filming to do. But the hardest task will be in the editing, reducing the 7 hours of material that we have down to around 7 minutes!
Then we hope to have something that will help Cameron to promote the many charities that he supports, as well as himself.
We hope to be able to release the film by the end of August or early September.
Posted by Hardy Productions UK at 11:54 PM