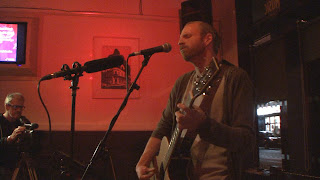 It is a Sunday evening and we are at one of the monthly Sunday Sessions at "Band on the Wall" in Manchester to film one or two of the sessions, and in particular, The Beggar Kings, Rob Lanyon (right) and JBS.
We are there with three video cameras, two of our normal Sony "work horses" which can operate in most conditions, and a very diddy palm sized HandyCam, all capable of producting high definition results. Being a live recording we are up against relatively poor lighting, even though we brought along one of our own portable LED lights. We are also up against a public address system which if you are not careful will drown out our own microphones linked to a portable 4 channel digital recorder. Our highly directional microphones are focused as well as possible on voice and guitar.
But after nearly 2 hours of filming, we have something in the can to take back for post production. The results are going up on YouTube, subject to the agreement of the performers.
The camera operators: Michael Thompson, Nigel Anderson and Richard Green.
View Rob Lanyon's full video
Posted by Hardy Productions UK at 1:31 AM