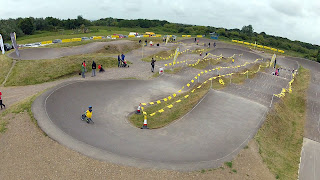 History doesn't repeat itself, or does it?
The Strider British Balance Bike Championships resumed on Sunday 16th June 2013 at the Gosport BMX track, and what an event it was!
Have a look at our film on the Strider YouTube Channel.
I don't know whether it was our imagination, but Strider racing just got more determined for the various children competing, of ages ranging from 2 years old up to 5 years old. And the event seemed to get faster and faster as we passed through the various heats. 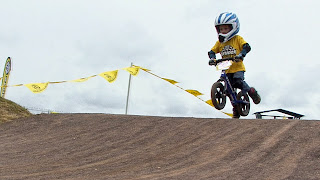 As before, we were asked to produce a short film of the event and for this, we agreed to use a similar format to that which we used for Merton, 6 weeks before, with plenty of action! This was not difficult to do since some of the children are so adventurous, they are able to throw their bikes into the air (aged 3?) and ride with their feet in the air also. This is no mean feat when you have two wheels but no pedals!
There were clear winners in all of the age groups, two local children winning the 3s (Callaghan) and the 5s (Jack), and one Norwegian (via Manchester), Alexander, who had already secured a place at the Manchester finals in September when competing at Merton. And not least, Troy won the 2s!
The next event is at Gravesend on Sunday 21st July 2013.
Posted by Hardy Productions UK at 11:53 PM