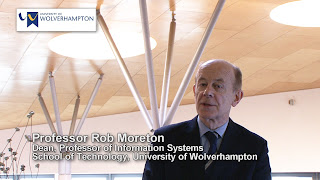 I had the pleasure on Thursday 23rd February of going to the Deanery at University of Wolverhampton to film Prof. Rob Moreton, Dean, Professor of Information Systems at the School of Technology talking about his and the University's enthusiasm for sponsoring the West Midlands Constructing Excellence Awards 2012 - Innovation Award.
Rob stood on the balcony of the Deanery, above the noisy mill of students below him, talking to camera, watched by his colleagues in the Deanery itself.
The noise below presented sound difficulties which were soon overcome using a microphone clipped to his tie, and recorded separately for synchronisation during the edit stage. This was the first time I had used a small battery powered LED fill in light and it worked a dream.
We use Sony Vegas Pro 11 for film editing which, after you get to know it, is easy to use and never ceases to surprise when it reveals yet something else it can do.
Enjoy the short film at http://youtu.be/so7xI9qZenA
Posted by Hardy Productions UK at 10:11 PM 1 comment: 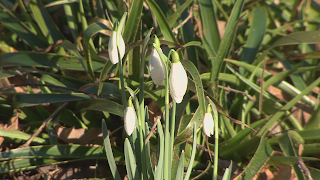 It was a spur of the moment decision to put the cameras in the car, accompanied by tripod and steadicam for a visit to Rode Hall in Cheshire on a very cold but sunny winter's day in early February, a day before the long expected snow arrived. Rode invites visitors to its mile long snowdrops walk each year from late January through until early March, showing off its many varieties of snowdrop, crocus and even a few early daffodils.
The resulting short film can be found on YouTube so as to share what can be experienced at Rode including the spectacular view across the frozen lake and the abundant wild life. 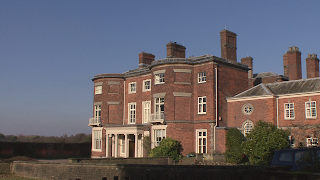 But while there, be sure to have a lunch including the most delicious home made pies! At any time of the year, Rode Hall is worth a visit, privately owned by the Baker Wilbraham family, whose current representatives are often present to help their visitors enjoy the very best of experiences. This family have enjoyed continuous occupation of Rode Hall since 1669, three years after the Great Fire of London.
Posted by Hardy Productions UK at 12:21 AM No comments: