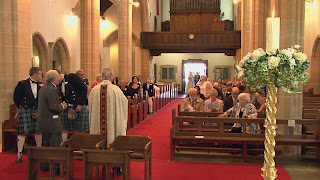 Weddings are very much in the air at this time of year, and it is number one, not only for the bride and groom, but for the videographer, that those irreplacable moments are recorded for posterity.
One of the first weddings that I covered was for friends (and fortunately unpaid - it was a gift). I had only one HD video camera at the time, and no additional sound recording equipment.
OK, it is amazing what you can do with one video camera, particularly if you have it set up on a tripod and dolly. This means that when at the crucial moment as you are filming the bride with her father, walking up the aisle, the unwanted obstruction by a guest moving into "the line of fire" so that they can see more clearly, can be corrected in a moment by moving the camera sideways and back into clear view. That is a relatively easy one.
But what if, in the same Church, the priest is using an acoustic system to make sure that the guests can hear everything that is said?
"It was installed by a soundman who works at Pinewood Studios, so it must be a good one", says the priest with pride.
And that same system muffles the sound being received by the camera microphone from certain positions in the Church so badly that the words being spoken cannot be deciphered? That is what happened to me, and, unfortunately, I had no separate back up sound recorder and microphones to pick up what was being said.
Well, I could hardly go back and ask them to do it again! Sub-titles were the answer on that occasion, accepted by the bride and groom as an unfortunate thing that could not have been avoided.
Lessons to be learnt: Try to be prepared for the unexpected, whether as a result of someone else or as a result of what is present, and ideally have a back up of some kind, for example a second camera, and most importantly, make sure that there is more than one microphone to record the sound, preferably to a separate recorder!
I make it a habit, prior to the event, to find out as much as I can about the programme of the event and the circumstances in which it will be taking place, ideally visiting locations in advance. That is often harder to arrange than one might imagine.
Then there is the stills photographer ...... but I will leave that for another time!
Posted by Hardy Productions UK at 2:27 AM No comments: