And so it goes on 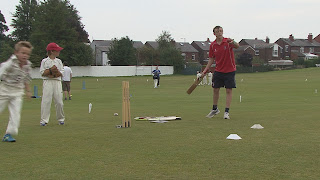 We had hoped to have completed our film on Cameron Foster, Olympic Torchbearer, Fund Raiser and Coach, but this has not been possible, as there are still one or two things to film and complete. But we are nearly there!
We were out filming him coaching youngsters at cricket at Wigan last Sunday morning, just before he and his family embarked on a trip to London in connection with the Olympics and his Diana Award. And we are due to film our last interview with someone on 31st August, who has been key to his work in recent years, particularly related to his passion for cricket.
We are also waiting for some footage of a famous cricketing celebrity.
Once it is all together, reviewed, re-edited, we hope to release - watch this space, hopefully mid-September.
Posted by Hardy Productions UK at 3:15 AM No comments: