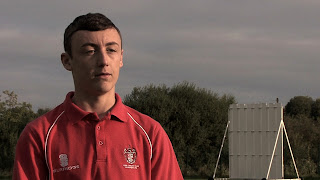 This is our first short documentary film and it has been a labour of love planning it, developing it, filming it, editing and producing it.
It is, we think, a quite remarkable and unique story about a young man in his late teens, who aged 9 had a traumatic accident which changed his entire attitude to life. He fell off a ski lift while on a school trip to Northern Italy and fell onto hard compacted ice, breaking almost every bone in his body. It truly is a story of A Phoenix Rising from the ashes of disaster.
Hardy Productions UK are proud to have made this film because we believe that it is a story worth telling.
We would like to thank Brian Blessed, Andrew "Freddie" Flintoff MBE, Trevor Barton MBE, Susan Heritage, Cameron Foster and his parents, Martin Ainscough, Lisa Nandy MP and several others for taking part in this film and for giving its creation so much support.
We have donated this film to Cameron to help him in the future and to help the various organisations that he has supported.
The film was made over a period of 4 months from the end of May to the middle of September 2012.
Running Time: 15 1/2 minutes.
View on YouTube at http://www.youtube.com/watch?v=kUUh5VsjAs8
Posted by Hardy Productions UK at 11:33 PM No comments:

The Story of Chorlton-Cum-Hardy lives on!

Hardy Productions UK was delighted to be able to attend and film the opening ceremony of the exhibition for "Chorlton-Cum-Hardy - The Story" on 7th September. The Right Honourable Lord Bradley of Withington opened the exibition which is to be found on 80 metres of hoarding around the old Cosgrove Hall film studio site (Albany Road), the birthplace of many stop motion films, such as "Chorlton and the Wheelies" and "Postman Pat". The site is now being turned into retirement homes by McCarthy & Stone, to be called "Cosgrove Court", ready for occupation in 2013.
The exhibition is about the passage of time, from the 17th Century through to the present day, showing paintings of some of the more iconic streets and buildings by local artist Peter Topping (GLAD TO BE IN CHORLTON) and the story, written by local historian, author and researcher, Andrew Simpson.
McCarthy & Stone donated the funds for the exhibition, enabling something which is unique to Chorlton, and which could be unique to Manchester and the rest of the nation.
The production of the film, just under 7 minutes long, is now available to view.
Click here to view video
Posted by Hardy Productions UK at 12:53 AM 1 comment: