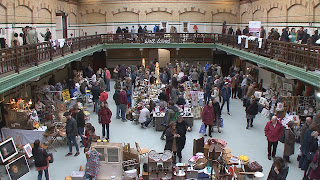 We were delighted to have been invited to film the Vintage Home Show at the Victoria Baths, Manchester on 28th October. Although the show started at 11am for the general public, setting up of the stalls commenced at 8am, and we were there shortly afterwards, meeting with the organiser, Keeley Harris of Discover Vintage, and various stall holders, and interviewing them for the film. There was so much to see at the show, and I found myself excited at the prospect of re-discovering things that were familiar to me, not only in the 1970s, but in the 1960s, and even in the 1950s!
One of the hardest things is to find members of the public who will stand in front of the camera and be interviewed. But two ladies were brave enough to do just that - why is it that men always seem to avoid such things by referring you to their wives or girlfriends?!!
You can see the short film on YouTube at http://www.youtube.com/watch?v=GHrtLy7rFiI. It is only 3 minutes long and shows lots of things that were there for sale. So enjoy! And for those old enough, immerse yourself in the nostalgia! We made this film in association with Freezeframe Productions.
The next Vintage Home Show is at Fazeley, Birmingham on 18th November 2012.
Posted by Hardy Productions UK at 3:25 AM 1 comment: