Hardy Productions UK started officially in April 2012 although our cameras had been filming for a year before that, supporting an organisation in the West Midlands called the WMCCE where Michael Thompson worked part time as an Executive Advisor. Moving from the Construction Industry after 45 years into the filming and production industry was quite a move! Michael had filmed a few weddings during his time, first using VHS tape (the technical quality? Oh dear!) and later moving to high definition video about 4 years ago. So the move to filming and production was in fact a natural one.

Nigel Anderson came on the scene also having had filming experience over a number of years, with a very creative "bent". He has great imagination and when he can, likes to introduce it into his films. He is also an adept still photographer.

We have been fortunate during 2012 and have had fun also! As a small independent enterprise in Chorlton, to the south and west of Manchester, we have made a number of films both for the community, unpaid, and for commercial organisations, paid. We love the mix, and also the challenge, preferring to make unique ("one off") films rather than too many of the same.

One of the highlights of our year was the filming of Cameron Foster - A Phoenix Rising, a 15 minute documentary on a young man of 17 who as a result of an accident when he was 9, has raised a considerable amount of money for charity. We were grateful for the support of Brian Blessed, Freddie Flintoff and many others during the making of this film.

We have had enormous fun working with Strider ("Join the Balance Bike Revolution") at the National Cycling Centre. We have worked with The Vintage Home Show at Victoria Baths, Manchester, with Sports Travel International at Bolton Wanderers, and with many others.

We are looking for more challenges, and we are looking for the development of a film making alliance in the North West of England where small independent enterprises like ourselves can work together and take on productions which one enterprise alone could not do. So far, we have worked with Freezeframe Productions and Tristan Mayer.

Posted by Hardy Productions UK at 12:10 AM No comments: 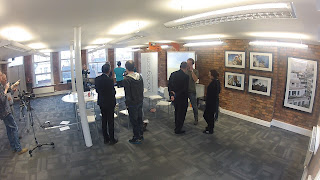 It is 11o'clock on a Thursday morning and we have arrived complete with equipment for the filming of a Conference Event in Central Manchester. Our client has asked us to film 9 people discussing various subjects around a conference table, and so far as possible, make it look natural. We have two and a half hours of filming ahead of us, with three operated High Definition cameras and a small static HD camera set up on a tripod looking across the proceedings (the still seen here is from that camera). In addition to the cameras is our portable 4 channel digital sound recorder attached to 4 microphones mounted on the conference table.

It is actually quite difficult with an event like this to prevent the filming from taking over completely, but fortunately, only once, near the beginning did we have to bring the proceedings to a grinding halt and start again. Some of the invitees couldn't be seen at all by the centrally positioned camera.

We could ask for nothing more from the performance of our client and their invitees who attended the session. They were excellent! They maintained a natural air all the way through and must have been just as tired as our three camera operatives by the finish!

The filming went smoothly and soon we had 8 hours of film "in the can" - actually on MiniDV Tape and on SD cards.

Having completed the session and also recorded some interviews, it was time to take our film back to the editing suite, and to start work synchronizing four camera sound tracks and a further 4 microphone soundtracks, so that they all sounded as one and maintained a stereophonic sound image. Actually, once synched, we don't bother too much about the camera sound tracks, and turn them down or even off altogether if there is sufficient input from the main microphones!

Then the editing begins in earnest. You have to select which camera output is used where and for how long so that the resulting film looks natural. The beauty of using 4 cameras is that you have so much to choose from when editing!

The results? The Client is pleased and the 7 short films of the event will be released for public viewing early in 2013.

Our thanks go to Reading Room Manchester for hosting the event and being our Client, and to Tristan Mayer for providing camera operator support to us. And lastly, we would like to thank Freezeframe Productions for their association with us on this production.
Posted by Hardy Productions UK at 5:02 AM No comments: