Filming a short drama in a front room 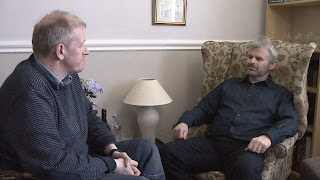 Imagine the scene.
It is a cold afternoon in late March with unseasonal snow outside. It is far too cold to be outside for any length of time. Four people are there who have come together to make a very short teaser film based on a script written by one of those present. We have an HD camera set up on a track, we have a microphone on a boom and we have lights.
Two people are in front of the camera, another is directing and another is operating the camera.
Three hours later, having set up several camera positions, and after a lot of takes, we have 30 minutes of film in the can, which we can view as rushes on the TV there and then.
This is how we came to make a short teaser called "Cry ENGLAND", written by our colleague Nigel Anderson, acted by Nigel and by Chris Burton, both seen in the picture from left to right, and me behind the camera, directed by Charlie Allen, a professional actor and coach - a multi-talented guy.
We are hopeful that this short session together with the editing the next day down to less than 90 seconds (11 lines of script) will be the seed of a small group of like minded people in the Chorlton cum Hardy area of south Manchester to start making short dramatic films of a high standard, for enjoyment and for entry into the likes of competitions.
If there are others in the south Manchester area who feel that they would like to get involved, you can contact us through our website.
Posted by Hardy Productions UK at 12:19 AM No comments:

Adding to our filming resources 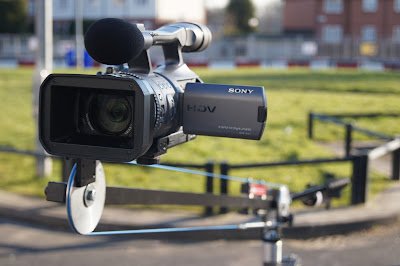 Any organisation has to speculate to accumulate and Hardy Productions UK is no exception.
In the past month, we have acquired a Tripod Tracking Dolly and a Jib (see the camera mounted on the jib in the picture right), both designed to enable the camera, when in operation, to glide or fly, horizontally, vertically, diagonally, smoothly. With the track, the present distance of travel is 5m (16ft).
After all, who keeps any shot steady for any length of time these days!
We are now in the early stages of testing the equipment out and hope to show examples of what it can do over the coming weeks.

Posted by Hardy Productions UK at 1:36 AM No comments: