Making a Screentest in the back garden 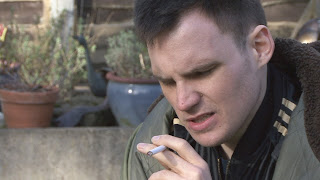 Last Tuesday afternoon saw us in our back garden setting up for a screentest for a young actor who is expected to take a part in a short drama, "Cry England!" that we hope to start filming in May.
So here we are, laying the track across the grass so that we can move the camera smoothly. The sun is shining for once and it is relatively warm. The camera is soon in place on its tracking dolly, the actor, Stephen, is also in place having rehearsed his lines, and we call "Action!" .
Stephen starts to move towards the camera while the camera is moving backwards in perfect unison ....
How is it that immediately that "Action!" call is made, the world comes to life?
The dogs next door start to bark, an aircraft decides to take off from Manchester Airport, 4 miles away, and the wind starts to blow. 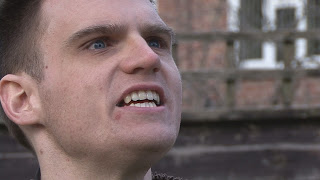 Now, this is not an ordinary wind. It seems to want to build up to gale force! Despite our wind muff and 'dead cat' on the highly directional microphone, it is not enough, and we have to stop until things have died down.
Fortunately things do die down, the call for action is made again and the wind starts to blow. Is the weather listening? Or what?
As it happens, for the two short scenes we were rehearsing, we did get sufficient in the can to be able to put something together fairly respectable afterwards.
And, as for Stephen, he is quite unrecognisable after we made him take off his glasses and hold a (fake) cigarette. Well done, Stephen, for playing a totally obnoxious young man far from his normal character! Let us hope that the right person will see it and it will help him to get work as a budding young actor.........
And now the screentest ......

The photos are HD stills taken from the Screentest - click on them to see them at full frame size.
Posted by Hardy Productions UK at 2:33 AM No comments: