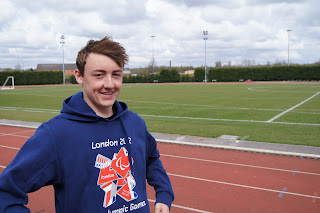 It is windy, so we have a shotgun microphone inside a blimp, perched on the end of a microphone boom, linked to a portable 4 track digital sound recorder. It is our habit to record the voice through this type of arrangement when out of doors, to be synchronised with the camera sound tracks afterwards. We have two cameras set up, one on a standard tripod, static, which can catch Cameron's profile while he speaks. The other is mounted on a jib (the first time that we have used this for a film production), the jib arranged so that it can raise the camera from ground level up to face level in a flash as Cameron walks towards it at the start of filming. This will help with the first shots of Cameron and will be mixed with other shots of disabled children on bikes at a session immediately after the filming, named "Wheels for All". Some of this is filmed using our GoPro HD camera mounted on the handlebars of Cameron's bike. We have clips also which we took last year indoors at Robin Park of one of Cameron's coaching sessions.
The whole purpose of this corporate video is to allow the viewer to meet Cameron, to hear about  the Foundation and to see first hand what he does to help disabled youngsters as well as raise money for them. To date, he has raised around £30,000 and has ambitions to go much much further. Further information can be found on his website at www.cameronfoster.co.uk.

View on YouTube.
Posted by Hardy Productions UK at 11:26 PM No comments:

The Strider British Balance Bike Championships have started for 2013 with the first of the events at the Merton BMX Track on Sunday 5th May 2013.
We at Hardy Productions UK are proud to have been asked to film all of the Championship events for Strider this year.
Competing at Merton BMX Track were over 100 children (ages between 2 and 5) on their Balance Bikes. Winner of the 3 year olds was Ashton Heron who is the reigning UK Champion who went to Florida last October to represent the UK in the World Cup championships. Will he be there again next October?
We have completed a first rush (preview) for the press of the Merton event and this can be found on Strider's YouTube Channel.
The full version of the Merton event can also be found by clicking here.
There are four other events in June (Gosport), July (Gravesend), August (Birmingham) and September (Manchester, including the finals). You can find more information on this at www.strideruk.org.
Posted by Hardy Productions UK at 12:57 AM No comments: