"Cry England!" - the challenge of the soundtrack

The film is in the "can", the sound has been recorded, the music and sound effects have been made and selected for use.
Each scene has been created and the first cut of the film has been put together, with titles, with everything that we think we need to create the finished film.
And then comes the sound. There is the sound track recorded at the time of filming.
How odd it is that whenever we are out of doors, even with a blimp on the microphone, the wind seems to be blowing a gale! How odd it is that there are ice cream vans advertising their wares in the distance, planes flying overhead, people and children shouting nearby and cars and lorries making a procession down neighbouring roads!
Well, I think that we have coped reasonably well with all that, suppressing what we can and bringing every voice recording up to approximately the level it should be. Although our voice microphones are mono, that is not going to stop us from making a finished stereo product for the main speech track. As an example, McBride in the still above speaks more from the left, Garry speaks more from the right.
We do have additional software to work on the sound. Althouh we edit in Sony Vegas Pro 12 which is a good video editing program, we take sound that needs more attention into Sony Sound Forge Pro, and if it is particularly difficult to work with, even into Sony Spectralayers Pro. The latter has the ability to take out unwanted noise, particularly hum, background noise and the like leaving a cleaner recording. All you have to do is find the sound print for the offending noise and extract it.
But the sound processing didn't finish there.
We decided that we should present the film, particularly to our cast who will see it first, in 5.1 surround sound. That is not so difficult as it seems as long as you keep clear of the speech sound tracks, after all they are presented on screen, and sit within the screen for the most part, so stereo placed at the front of the surround spectrum should be adequate more often than not. But what of certain sound effects. There is one sound effect and voice also (I shan't say any more than that) which are particularly good if kept at the back (on the rear speakers). And some of the music, rather than sitting in the middle of the surround spectrum, may sound more appropriate in other locations, front or back.
We are excited by what we have produced which is now on a BluRay disc. We hope our cast, when they see the preview, will share our excitement, and hopefully, if we feel we can go ahead with presenting the film, others will feel the same, too!
The trailer for "Cry England!" can be seen on YouTube at https://www.youtube.com/watch?v=Bms7oCEBc2A - release date, September / October when we hope to stage a "premiere".
"Cry England, cry!"

Posted by Hardy Productions UK at 6:51 AM No comments: 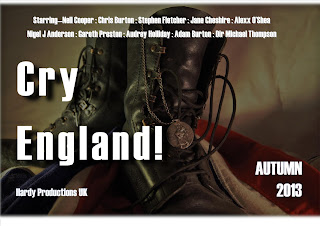 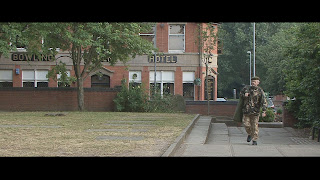 For those involved in the making, it is project of opportunity. Many of the actors and crew have aspirations to work in the film and media industry. Some just have aspirations to work. All will have copies of the film for their own use when marketing themselves to potential employers or for potential opportunities. We may be biased, but we think the level of acting in the filming is excellent!
We would like to think of this as a community project, particularly in the Chorlton-cum-Hardy area of Manchester. As part of this, it is our hope that we will find opportunity when exhibiting the film to collect money for charity.
So if you are in the Manchester area, look out for "Cry England!" and if you can, go and see it.
Release, hopefully will be in September or October 2013.
Posted by Hardy Productions UK at 2:02 AM No comments: