The final edit for "Cry England!" is over, and the film has been made ready for its first public viewing in front of an invited audience on 14th November 2013. This is what the film looks like in the Sony Vegas Pro 12 editing suite, across three computer screens, from beginning to end (the end being at 36 minutes and 30 seconds).

It doesn't look much although you can see all of the scenes marked on the time line, the surround sound positioning for one of the sound tracks.
The picture is so wide that you can't see too much of the detail, but suffice it to say, every single scene has been put together elsewhere, rendered and then put into this final assembly. It is at this final stage that we have put in any visual effects that affect the whole scene, such as colouring for the flashbacks and dream scenes.
The left hand screen with the titles on it is the preview of the final film, complete with the 2.39:1 format (black bands top and bottom). The right hand screen shows an unedited preview of the first funeral scene, before the format was changed from 16:9 and before special effects have been added.
The overall film (apart from the titles) have also been given a colour effect to make it look more cinematic, and although not visible in the picture, this is also where most of the sound effects have been added, such as a church bell, the sound of a taxi and so on.
Premiere: 14th November 2013
Chorlton Film Institute: 19th December 2013.
Posted by Hardy Productions UK at 9:41 AM No comments: 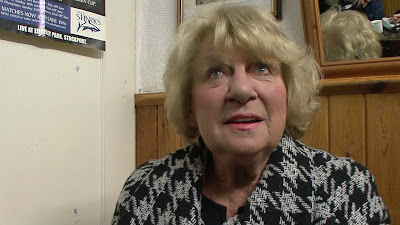 We were fortunate enough to be invited to film the unveiling of a carved oak bench seat in the Precinct of Chorlton-cum-Hardy, Manchester last Saturday. This coincided with the first Chorlton Art Market as part of the Chorlton Revival.
Now the bench seat is significant, not only because it has been carved out of three large pieces of oak with a chain saw, but because it is to commemorate a very much loved and respected photographer, Harry Goodwin, who made his name in the 1960s and later photographing the stars, particularly those on Top of the Pops. Harry died recently at the age of 89, and is already greatly missed amongst a community which included in the past the likes of the Bee Gees, George Best and Sir Matt Busby.
We were delighted to interview several of Harry's old friends, including one of those stars from the past, Jackie Trent, who was at No. 1 on the Top of the Pops in 1965 with "Where are you now, my love?". What a lovely lady she is as she talked about her experiences with Harry both in the past and in recent times. The interview is now published as part of the short film on the unveiling which includes interviews with other old friends like Nathan Birks who led the unveiling, Ron Keeling who ready his poem to Harry and John Leech MP.
You can view the film at http://www.youtube.com/watch?v=0NNYAH50lwM
Posted by Hardy Productions UK at 8:16 AM No comments: