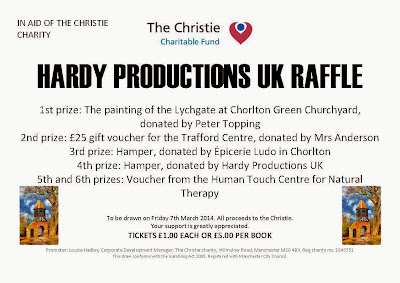 It was not our original intention when we started planning the making of our first film drama "Cry England!" to use it to raise money for charity. That was something that was decided by the cast and crew during our get together after the last scene was "in the can". Not only that, but the popular vote was to donate to The Christie Charity.
We have now had collections at two public showings of the film, the first at our premiere on 14th November 2013 and the second at the showing at the Chorlton Film Institute on 19th December 2013.
At both showings, the collecting buckets were out and we raised a certain amount of money, but we have decided to use a slightly different approach through a raffle. We are particularly lucky in as much as we have been offered some generous prizes, the not least being a painting of the Chorlton Green Churchyard lychgate by artist, Peter Topping, probably one of the most iconic structures in Chorlton, representing all that is left of what is the site of the original St Clement's Church. The total value of the prizes offered so far amounts to over £200.
The raffle tickets are currently being printed and should be available immediately after Christmas for sale until the draw at The Christie Charity on 7th March 2014.
Wouldn't it be great if we could raise our target of £2,000 from all of the collections made, for donation to such a worthwhile cause?

Posted by Hardy Productions UK at 11:20 PM No comments:

Glad to be in Chorlton, fundraising for the Christie Hospital

Raising money for charity is not one of our primary objectives at Hardy Productions UK, although helping the community is.
Our film drama "Cry England!" was made to help members of its cast and crew to show their ability and skills, particularly those who are currently not in employment.
The planning started in February 2013 with a script, the filming took place in and around Chorlton from May to August, and post production was finished in October.
Our film premiere was at the BlueBox Theatre, Chorlton High School on 14th November 2013 in front of an invited audience of about 80 people. In accordance with the majority wish, it was decided to raise money during the evening for The Christie Charity, so the buckets were out on the night and funds collected.
Imagine our surprise, therefore, when we were approached by BBC Radio Manchester who told us that their presenter, Andy Crane, would be walking 25 kilometers between the Salford Royal and the Christie Hospital and return on Friday 29th November for the Christie in memory of his mother who died 30 years ago of cancer. Could we meet with Andy during his walk? But of course! And the venue chosen was the Chorlton High School, the scene of our premiere. Andy agreed to be interviewed on film by us while he in turn interviewed us live on BBC Radio Manchester.
His broadcast equipment for the the live interview was impressive, one microphone and one iPad. Soon we were in communication with Sam Walker who was broadcasting from the Christie Hospital a mile or so away. All went well to start off, but suddenly at the end of the first interview, the line went dead and the broadcast was over. Such is life.
Not all is lost as you can watch our short film, GLAD TO BE IN CHORLTON - Fundraising for the Christie which shows part of the live broadcast and has interviews with Andy Crane, Michael Thompson, Stephen Fletcher, Peter Topping and Nigel J Anderson.
We are not releasing "Cry England!" to the internet for a long while (possibly not before late 2014) but it is being shown at various venues including the Chorlton Film Institute (19th December) and the Bowling Green Hotel (used in an early scene of the film) for which a date is still to be arranged. It is also being entered into various Film and Arts Festivals nationally.
A full press release on the film can be found on our website.
Posted by Hardy Productions UK at 12:09 AM No comments: