People may well ask why we selected Talbot House as the organisation to support during the promotion of our latest short film drama, ANGEL SNOW.

Ron Keeling, who had given us considerable help with the making of ANGEL SNOW and whose family have a strong association with Talbot House asked if we could contribute to them. We said "yes".

So it was that last Tuesday morning, we arrived at Talbot House, tucked away in the Newton Heath area of Manchester to meet up with Bernie Wood, the General Manager, her wonderful colleagues, all parents and carers.

First stop, a welcome cup of tea and then into the main office (just about fits three desks in there) complete with 4K camera, lights and sound equipment.

I should know better than to film against a bright window background, and when Bernie saw herself on the small screen afterwards, she was the first comment that her face was in shadow, despite a small fill in light on her face during filming.

And so it was, but with some post-production jiggery-pokery, I doubt that you would know it. I shan't say how it was done, but thank goodness for special effects!

After Bernie, it was Fran's turn to sit in front of the camera, in the same tight office, by turning the camera round through 90 degrees and re-positioning the lighting and the microphone.

Fran, like Bernie, talked about why Talbot House is so important to her and to all of the families that are being supported by it.

This organisation receives no Government support, relying entirely on the good nature of the people who recognise the importance of what is being done there.

In fact, it was so very noticeable with all of the people who spoke to us, Bernie, Fran and three parent carers, that they all spoke from their heart. They have known the good times and they have known equally the not so good times.

With 5 interviews in the can and various other shots taken of activities such as a regular meeting with parent carers, and some "pampering", designed to make the parent carers and the cared feel good, it was time to get back and start on the post-production of the film.

Released today, this can now be found on YouTube, by clicking below:

Donations can be made through the Talbot House website. And if you come to the Angel Snow premiere on 20th February, you too can have the opportunity to contribute to an excellent organisation.

During the evening of 20th February 2015 at the International Anthony Burgess Foundation, a total of approximately £310 was collected for Talbot House.

There will be further opportunities to raise money through a major raffle and through further showings of Angel Snow and accompanying films.

Posted by Hardy Productions UK at 9:13 AM No comments:

The making of "Continental Shift" (Stolen from a Crow) 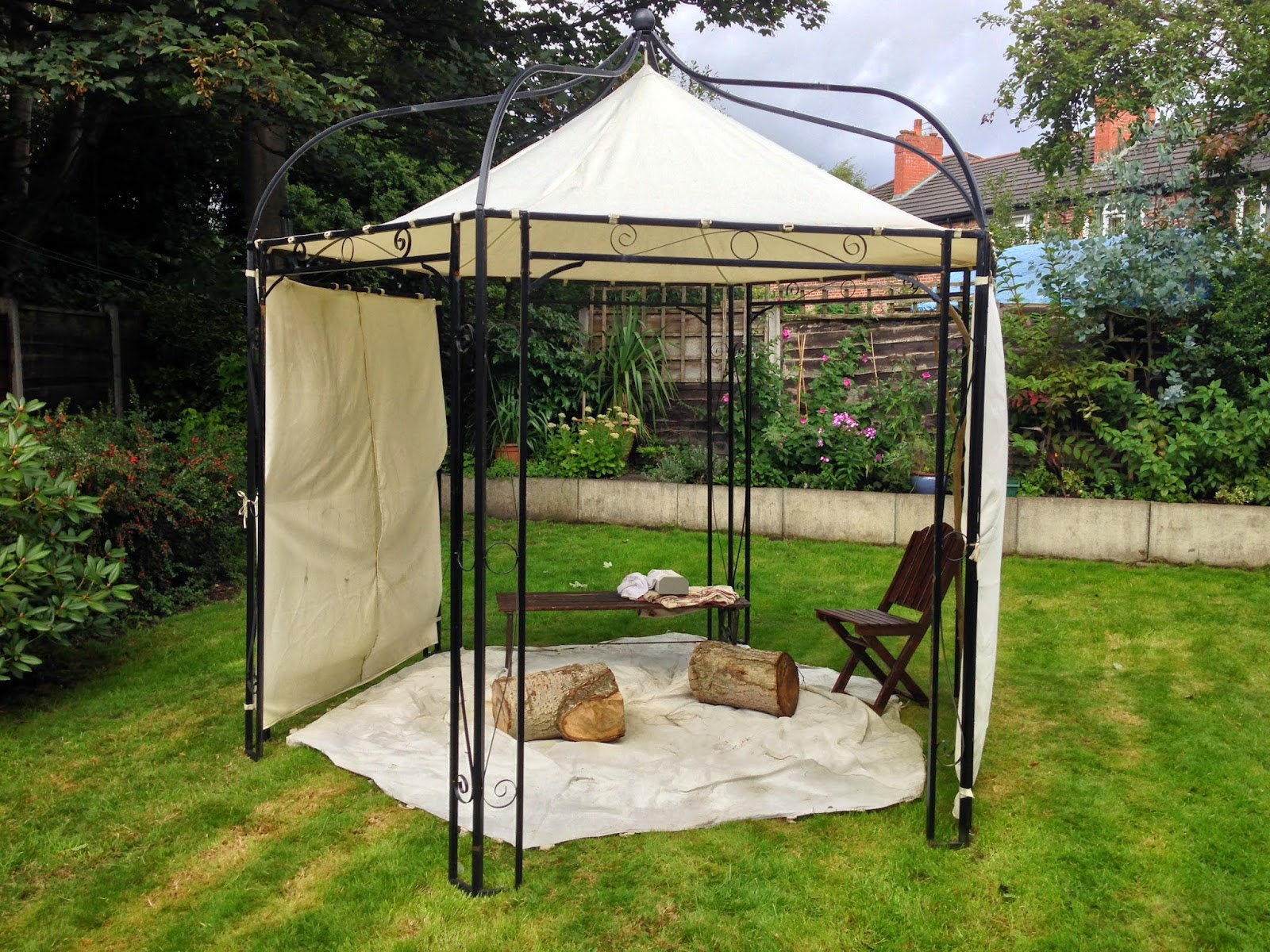 "A girl, once took a momentous trip, To embark on a continental shift ......"
It is Sunday, 31st August 2014, it is relatively fine, and we are in our back garden. This is a typical Summer's afternoon, you might say, but it is not.
We are assembling the set for our filming of "Continental Shift" (Stolen from a Crow) written and sung by Crispin Case-Leng. This is to be an exotic "hut" looking towards the sea.
OK, there is no sea in Chorlton-cum-Hardy, the nearest water being the river Mersey, half a mile away. But we do have green screens, and with these set up in the right position, we can create during post production, a sea aspect. 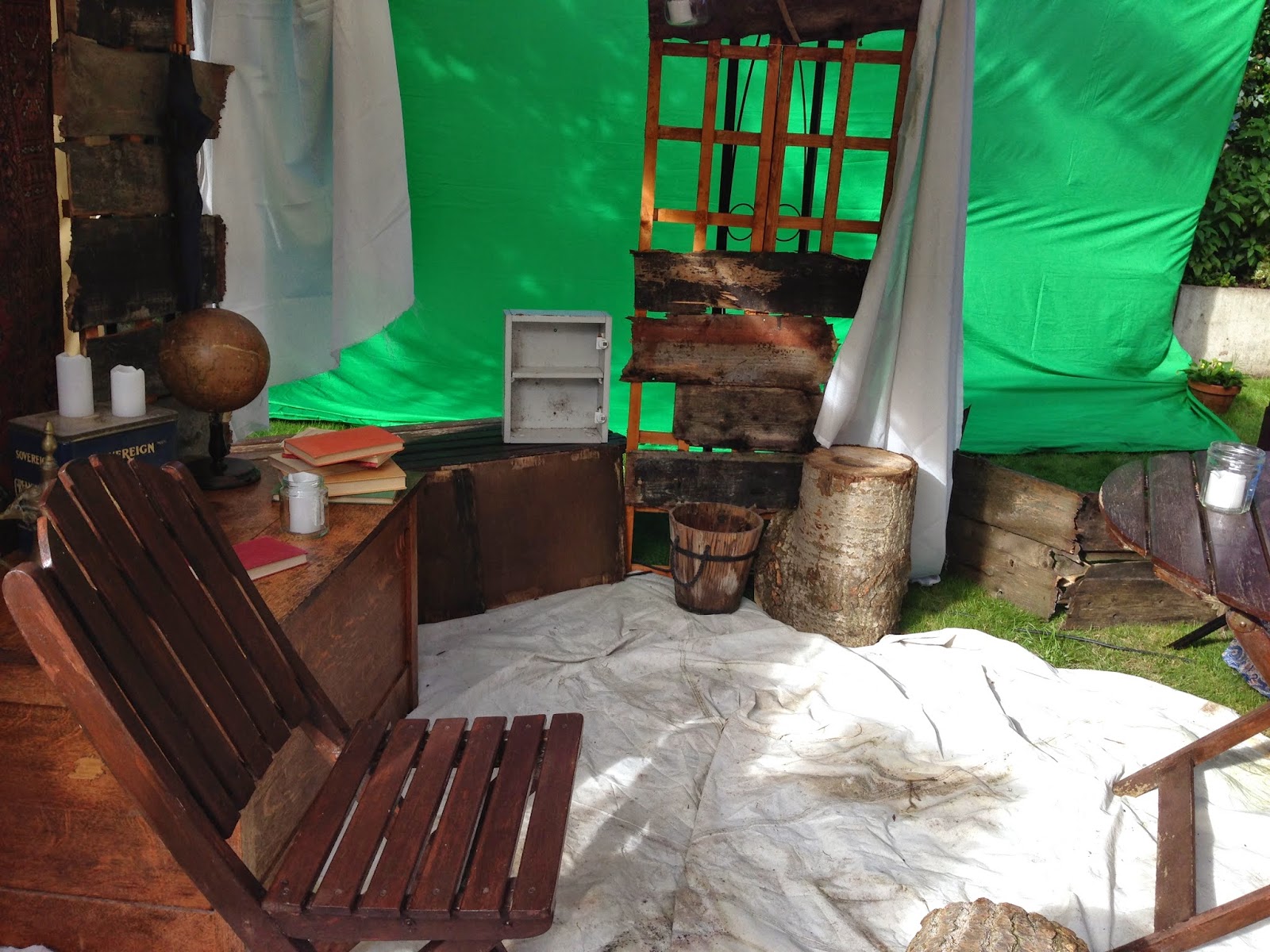 "That would change her life, Illuminate each of her nights, Embrace her in a tenderly mist ......"
It is now Sunday evening, Crispin has arrived, the sun is sinking below the horizon, the lights are set in position, the track is laid down for the camera, the sound system is ready to play, so that Crispin can mime, sing and play.
We are using a 4K video camera, producing an image size exactly four times that of High Definition.
Cables are hidden from camera view, the camera is rolling, sometimes on a tripod, mounted on a track, sometimes on a monopod when we get in close to the singer, his hands and the guitar.

"A boy, once turned his page to places new, Found something unintended, his heart grew ......"
"Music .......... and Action!"
The camera has started, the music has started, the singing and playing have started, and we are away.
The beauty of this kind of filming is that you do not have to worry about the sound quality. The microphone on board the camera is there only to make sure that we have a synch with the original sound recording. 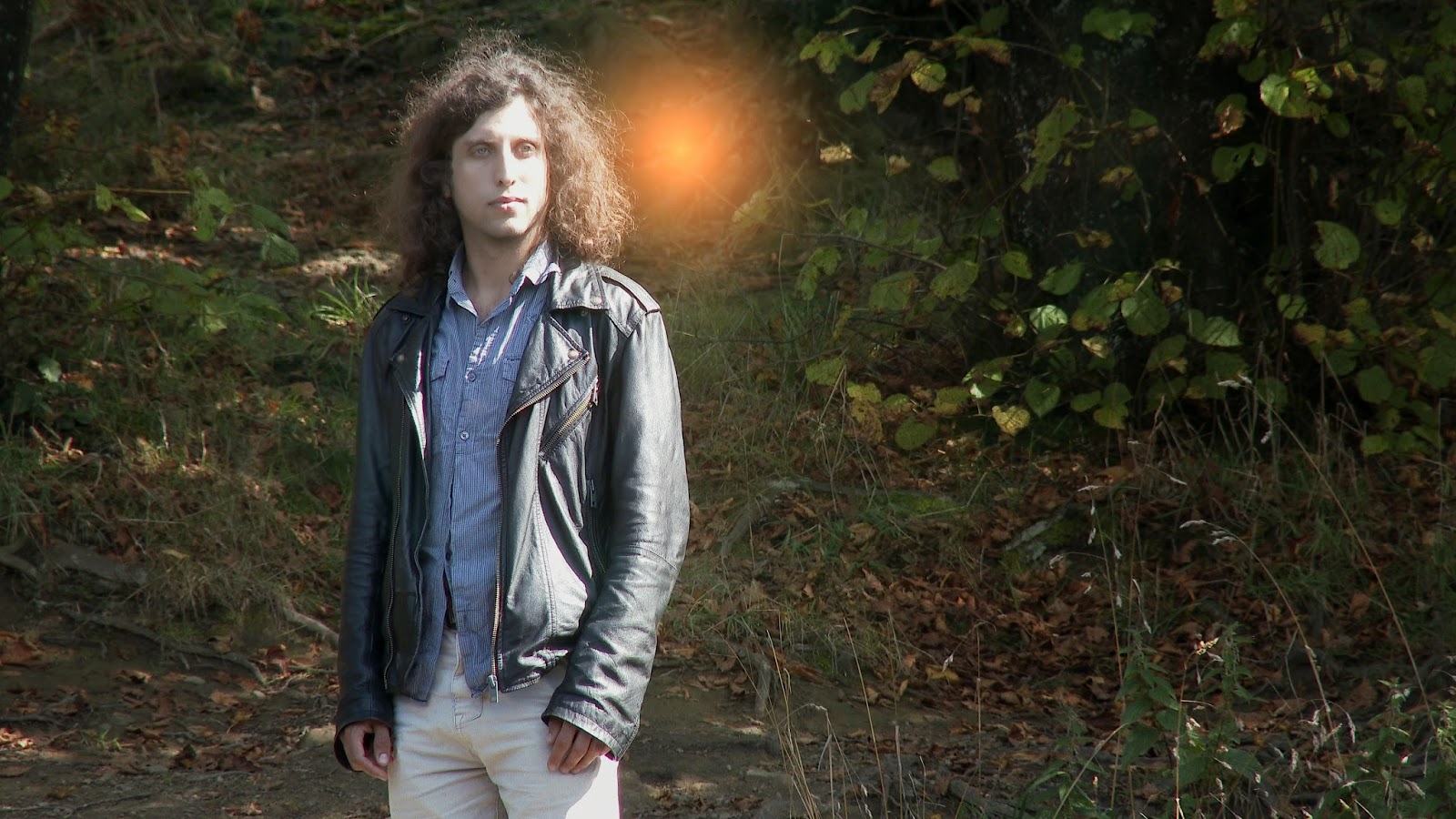 "Now the lady looks at the man, With something in their eyes only they can understand ......"
It is Tuesday, 2nd September, it is again fine, and we are at Rivington Pike, not far from Bolton in Lancashire. This is an old and abandoned estate once owned by the Lever family, famous for soap. The old house is gone, but the bridge has not, nor the uncared for Japanese gardens and lake.
Here, the boy meets the girl, represented by a glowing orb which follows and leads him around the estate. 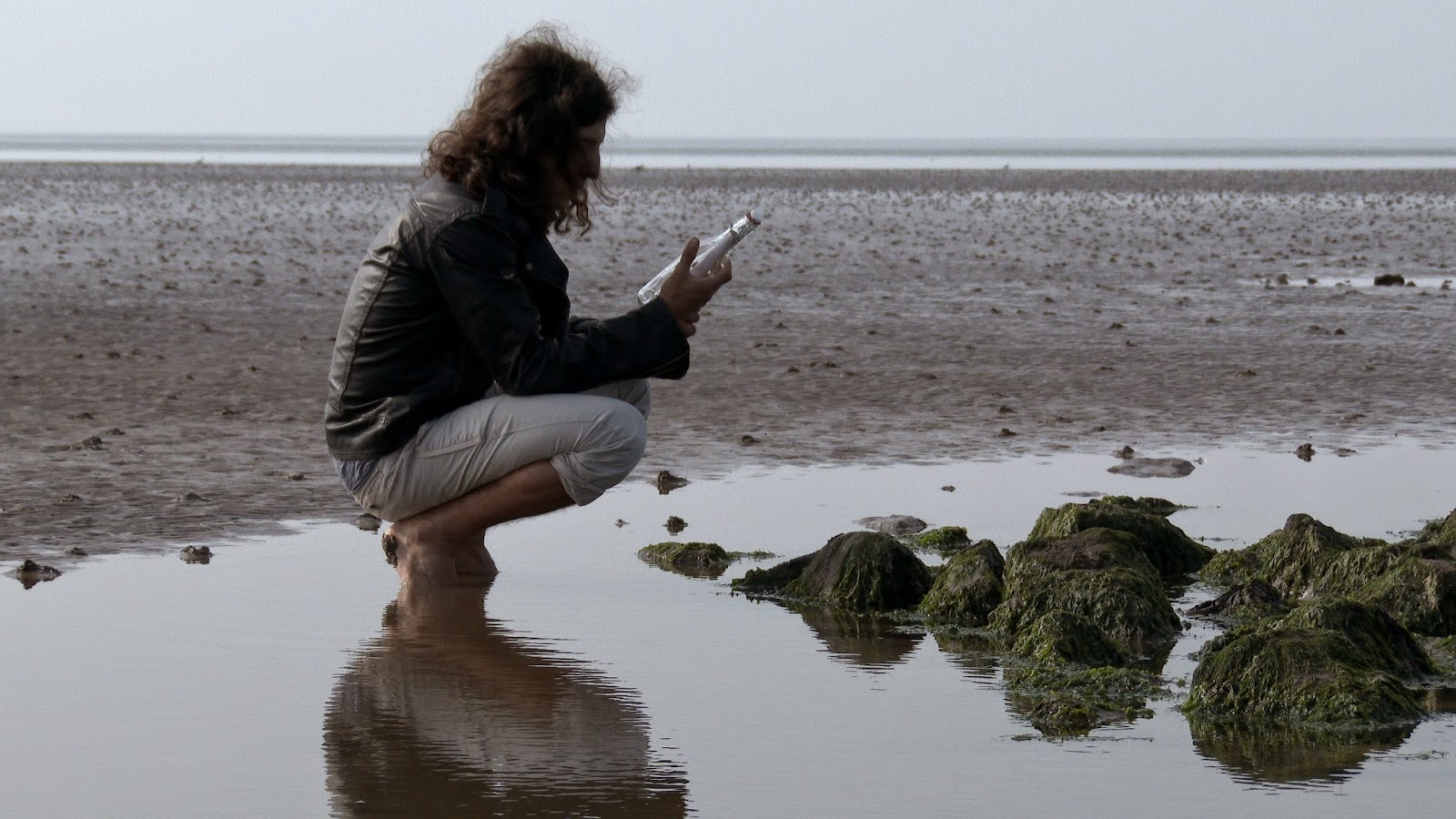 "Spreading its wings to the far corners of the world, To take up the girl in a blissful whirl ......"
It is Thursday, 4th September and this time we are at Heysham, just south of Morcambe, for the final beach filming. We need a rock pool (not many of those on the west coast of Lancashire) and a steady shot of the sea to use as the background, replacing the green screen at the back of that "exotic" hut.
Again, the weather is just right. The tides are right also. We couldn't have planned it better. It is to be an afternoon shoot at low tide with rock pools exposed. The boy finds a bottle with a note in it, in a rock pool, the note having "spread its wings to the far corners of the world".
And then a late afternoon visit to Morcambe just up the coast for a walk and fish and chips, before returning for an evening shoot when the tide has come back in. 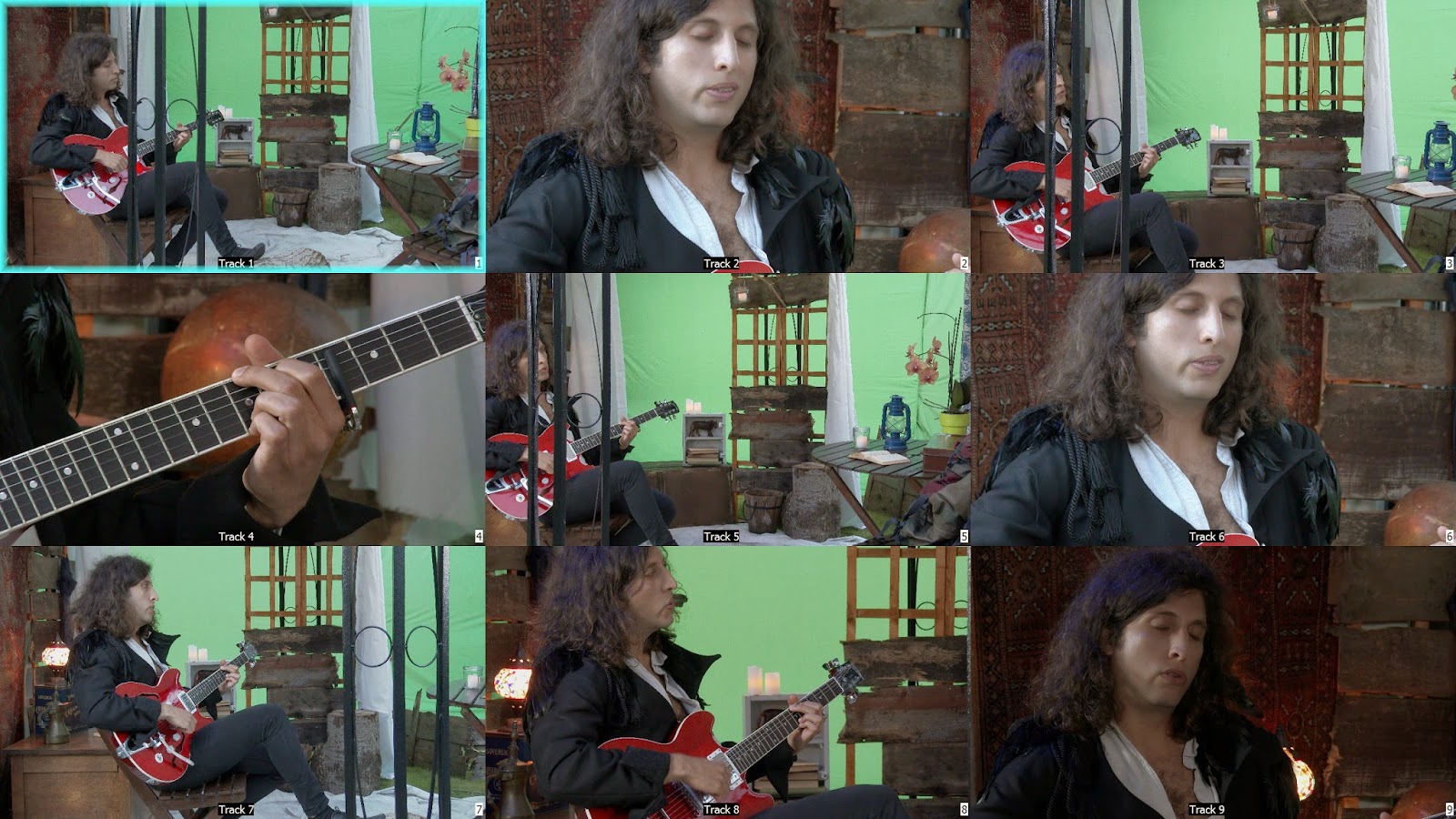 "The open rift is now closed ......"
The filming is over and the post production begins. We have at least 9 takes at any
one time to choose from, synchronised with the original soundtrack, with the green screen in place, so that it can be replaced by the sea in the background.
Fortunately, it all works well and it is not long before we have it put together, to be viewed by our client, Crispin Case-Leng. Let us tweak this and that, let us switch to the Heysham shots here and the Rivington Pike shots there, each telling the story within the overall story. 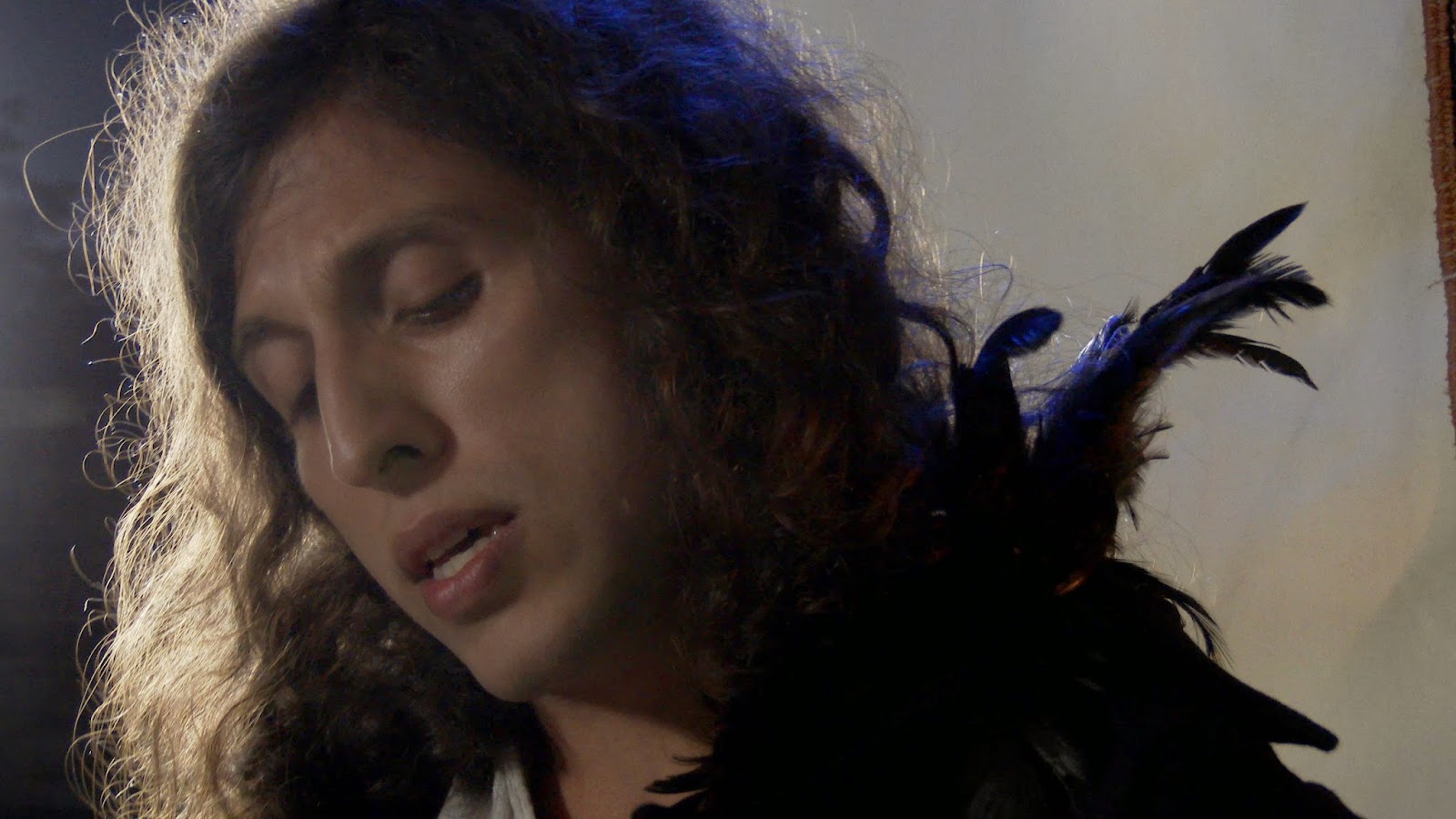 "To cause a warmth to build, Within each other's souls ......"
We all had great fun making this film and given a chance, would make another one, one day.
You can view the resulting film (in 4K) on YouTube.
And you can download the original sound recording for free from Soundcloud. 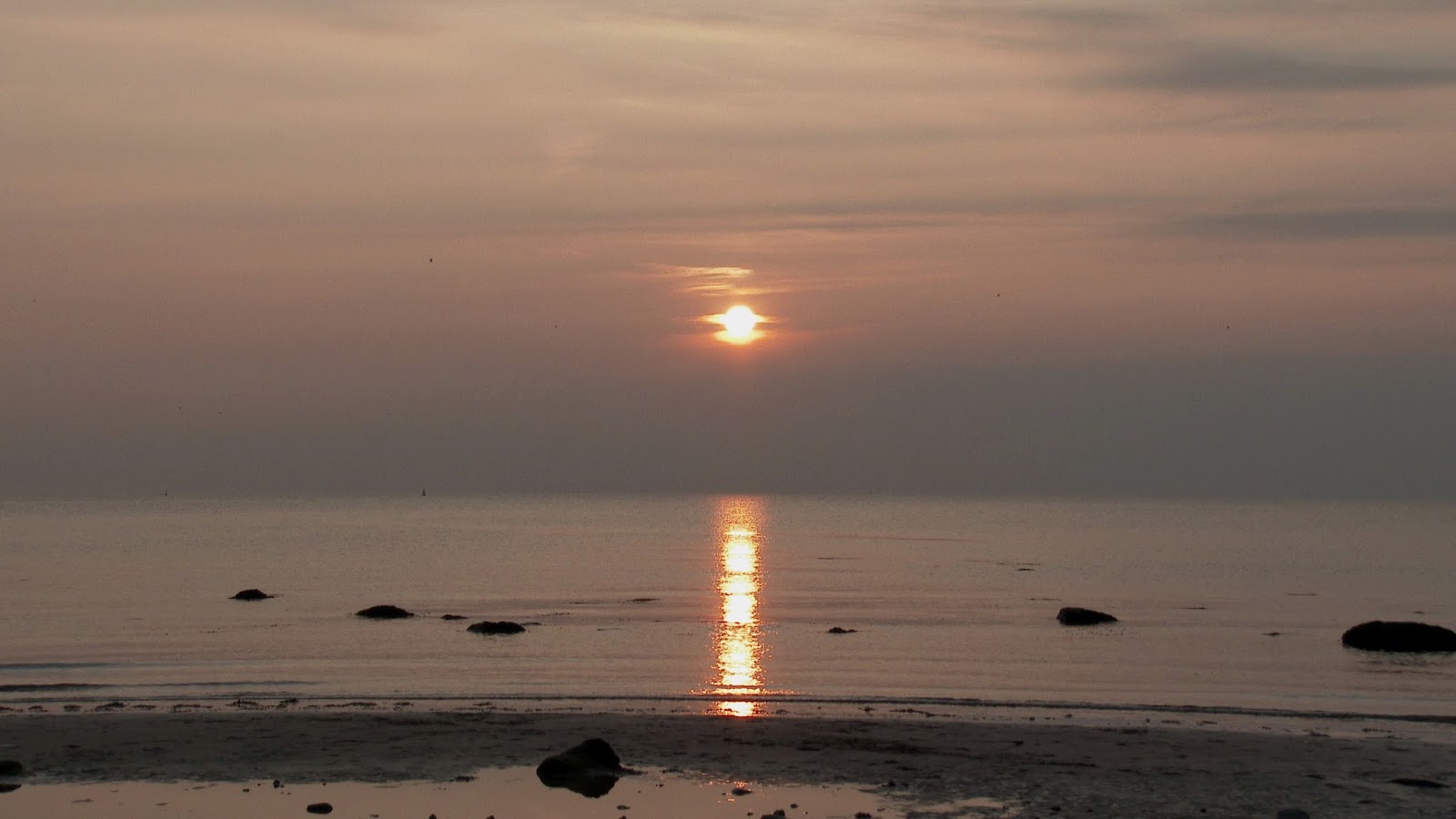 Footnote:
The music track of "Continental Shift" (Stolen from a Crow) was produced by John Delf, engineered by Mark Winterburn and Rory Vallely at Edge Recording Studios, Alderley Edge. Joe Oakes was on the drums, Charlie Allen on synths, and help came from the genius of Tony Forshaw.
Posted by Hardy Productions UK at 12:28 AM No comments: